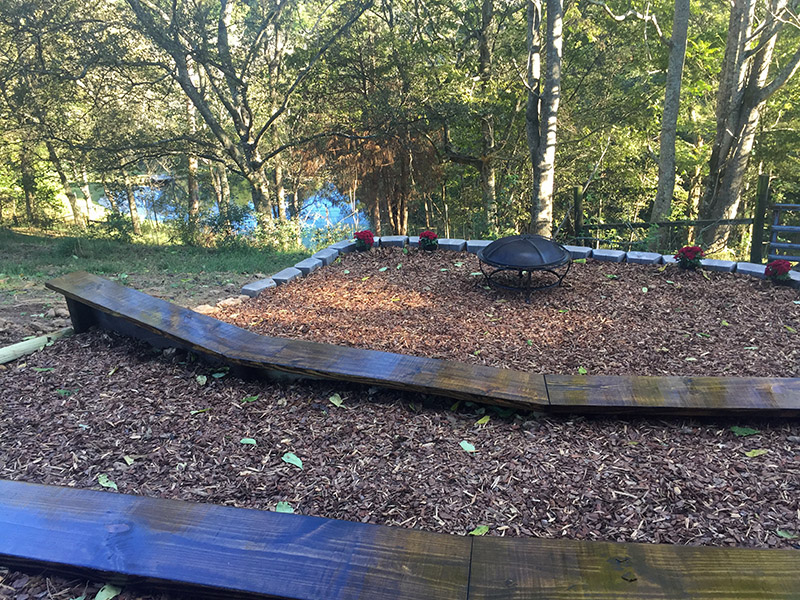 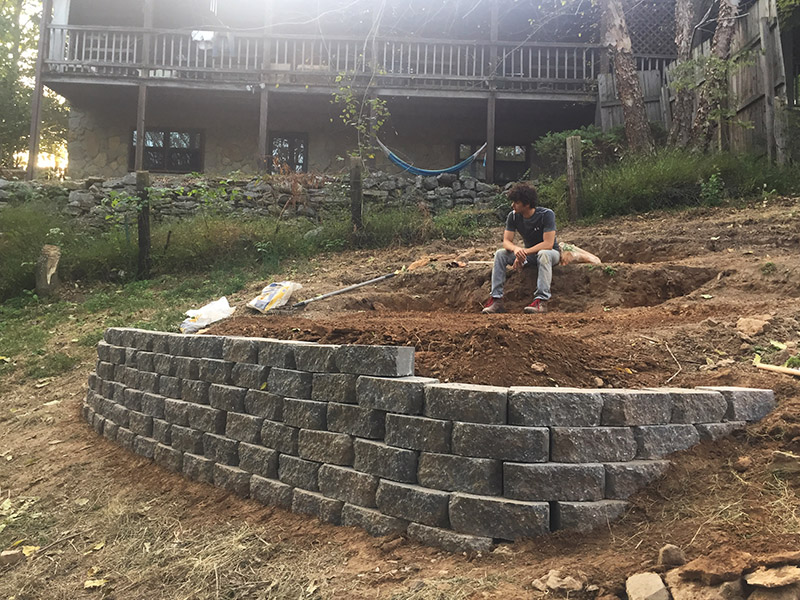 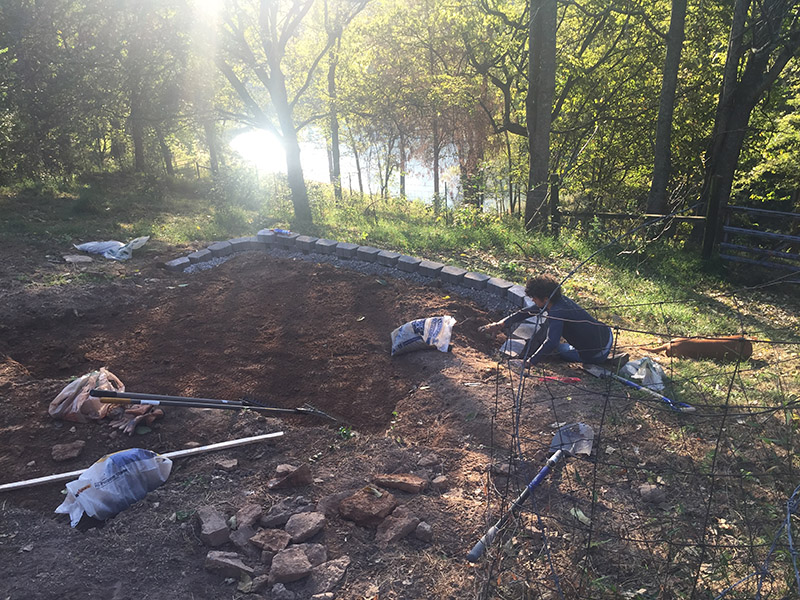 If you follow me on Anchor, then you've probably been hearing all about our home projects as they come along, and most recently, our biggest home project has been transforming an overgrown hillside into a usable fire pit and entertaining area. It took a lot of work and a lot more money than we originally thought, but the finished project ended up being better than we ever thought and definitely worth all the long days and sore muscles. It was also well worth the cost! After adding up all our receipts the project cost around $600 and 2 weeks of long days of work, which is more than we thought we were getting ourselves into, but now that it's finished, we're totally happy with it and realized that it definitely would have cost us well over that if we had not done it ourselves. I think we'll get at least $600 worth of use out of it, plus we added value to our home by adding more usable space and getting rid of an ugly weed patch. Who wants a view of weeds from their patio?

We decided to terrace the hill for two main reasons: first, to level out the hill so you can actually walk around on it safely, and secondly, to add built-in seating. We did this by making the upper retaining walls double as benches.

When we started this project, we had a general idea of what we were doing, but it really wasn't as planned out as you might think. It started with me just digging the basic shape I thought it would be while Jordan cleared brush and removed stumps. The great thing about me and Jordan working together on projects is that we both bring different skills to the project. I usually have the idea and vision that starts the project and then Jordan makes sure it gets done right. Neither of us are experienced enough to know exactly how it's going to end, but it's kind of fun to figure it out as we go and see it shape into the finished project through the process.

After I had dug out the basic outline, we decided to start on the retaining wall. We chose to use concrete landscaping bricks for the base wall because we thought it would be the hardest to repair when the wood eventually broke down. We wanted something that would last. We went with wood for the upper, smaller walls since they would be much easier to eventually replace. Wood is also a lot cheaper and less bulky which allowed us to get the exact shape we wanted for the seating. We used treated lumber for everything but the seats of the benches which we stained and sealed with at least 2 coats of marine varnish. We used marine varnish instead of deck sealer because it has great water protection and looks nice and shiny and feels super smooth and finished. The staining and varnishing was probably the most frustrating part of the entire project because we were so close to being done and all we could do was sit and wait for it to dry between coats.

One thing we learned while doing this project is that the most important thing to building retaining walls is plenty of good drainage (Thanks YouTube!). You should have at least 6 inches or more of drainage stone behind your wall. We also learned that the drainage material is where most of the cost is going to be. So make sure to factor that in when planning to build a retaining wall!

From there, we just started building and digging and building and digging until it started to take shape. We wanted it to feel as natural a flow as possible so we worked with the shape of the existing hill to decide where our walls and benches ended and how tall they ended up being while still being a reasonable bench height. We also didn't really have to add much dirt. We were able to pretty much just use all the dirt from what we dug from the hill to level out each tier.

One of the features of this project that I am probably most proud of is the stairs/path leading from our existing patio down to our new fire pit area. Because our patio sits on top of a rock wall, we needed some stairs. How the rocks are stacked, however, made it a little bit of a problem, and it was really hard to figure out how to make it work. It wasn't steep enough to just simply add stairs but wasn't sloped enough to walk down. I stared and thought for quite a while before I had any luck. One night when Jordan was gone, I went out and just started working on it. I looked around the yard for rocks I could add and just dug and placed rocks until it formed a walkable pathway. I still can't believed I got it to work without having to build a staircase. I ended up gluing some of the rocks to make sure they weren't going to move over time, and it seems to be pretty solid.

All in all, we couldn't be happier with the finished project! And if us newbs can do it, then I think just about anyone can with some hard work and research! Living in the age of the internet really makes learning how to do anything possible!

Email ThisBlogThis!Share to TwitterShare to FacebookShare to Pinterest
Labels: Home

Looks AWESOME! I'm excited for you guys and enjoying seeing all of the progress that you guys are making!

I really enjoy reading your blog, but I find it difficult to read when most of the font is so small :(

This blog post is really great; the standard stuff of the post is genuinely amazing.
find out this here

Nice Blogs!
Thanks for sharing this informative blog.
At Cropper Bros Retaining Walls we offer a wide range of durable concrete sleepers. As we all know that concrete does not rot, hence it can last a lifetime. Although our sleepers are manufactured to the highest possible standard using grey concrete only; once fixed and installed in place they can be painted in a wide array of colors. We use long lasting concrete sealants to guarantee that our products serve you for years to come.Singh Smart Alteration

Thanks for taking the time to discuss this, I feel strongly about it and love learning more on this topic. fireproofing your yard

Your articles are very well written and unique.
High PA