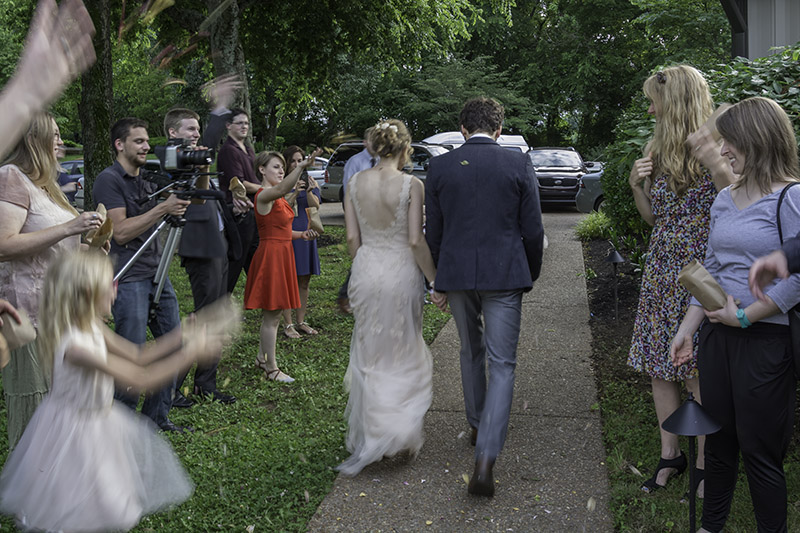 Even though we had a very short engagement, my wedding dress was a long time in the making. Let's just be honest, Jordan and I had been dating for a very long time and we knew we were going to have a short engagement. I knew that I wanted to make my dress which doesn't always fit well with a short engagement so I needed to get an early start. That being said, I decided to make a tester, prototype dress before we even got engaged. That way when it came down to it, I could be sure that I could even pull off making my dress because I had never made anything even close to that complicated before. What I didn't know is that that practice dress would actually become my actual dress.

It all started when I was browsing through Pinterest and saw a dress that I loved, but it was a designer dress and would be way out of my budget even used. There were also a few aspects of the dress that I would've changed, and why would I spend that much on a dress that I wish was just a little bit different anyway? So I just decided that I would make my own version.

I know the basics of sewing, but I am no seamstress. Seriously, believe it or not, I just winged it. I knew what I wanted and I knew I could figure out a way to make it work. The crazy part about me making my dress isn't my lack of sewing expertise, but what I made the dress out of.

It's a funny thing that you can actually buy clearance clothing for less than the cost of the fabric to make it. Knowing this, I bought 3 clearance dresses online from Forever 21 that were similar in color and fabric to what I wanted my future wedding dress to be, and those are what I used to make my dress. I did this in part because I got the dresses for less than I could have bought the fabric and I thought it would save time because I thought I would be able to preserve some of the existing dress structure. I was right in part because I did keep some of the original hemlines, but I ended up not being able to use as much as I had originally thought and almost completely reworked everything, ending in a dress that is pretty unrecognizable from the original dresses involved.

Like I mentioned above, this was supposed to be the practice project but as I worked on it, it was turning out so well that I decided to just keep going, and the practice dress became my wedding dress in progress. I continued to tweak and add to the dress until just 3 days before the wedding when I decided that it was finally done.

I thought I could save some of the dress structure because my original plan was to put the sheer outer layer of the dress on the right over the dress on the left, and with some slight modifications, that was going to be it! I mean, enough to see how I liked the style anyway. The result was horrifying. I looked like a sloppy marshmallow. Both dresses were huge on me. Forever 21 smalls are not small. It looked like a large. And in addition to that, the seams didn't match up and there was way too much bunchy fabric. It was just bad. Definitely not anything that resembled a wedding dress.

So the first step was to alter the base layer dress. I did this by pretty much completely cutting it apart and then sewing it back together, only smaller and with some modifications. This was my first time sewing with chiffon but I knew that my sewing machine would definitely eat the delicate fabric. I used tissue paper, like the kind for gift wrapping, on both sides of the seam to support the fabric and it worked like a charm. I also did the same for the sheer netting of the outer layer.

Next, I cut all the crochet lace appliqué off of the sheer dress and then cut those pieces into smaller sections. I used those pieces of lace as the lace on my dress. I was first going to simply sew the lace to the dress but the crochet was too harsh on the mesh and ended up looking too casual so I sewed the lace to the back side of the mesh which ended up giving it a softer look. This took the majority of the dress making time because I had to individually hand sew each piece on.

Once the dress was basically done, it was just down to the finishing touches. I felt like it wasn't fluffy enough so I ended up buying a second sheer dress (thankfully there were still some available on clearance. I guess nobody liked that dress!) and cut it into pieces to add fullness to the skirt. Most of what's under the skirt is just strips of fabric hanging freely under there. The effect was just what I was looking for.

My veil is a different story. I wanted to make a veil, but my mom said I should buy a nice one. So we ordered a champagne veil that was seriously beautiful, but when it came the day before my wedding it looked seriously orange next to my dress. I wasn't too worried. I settled on the idea that I would just pin some fabric on my head and be done with it. I mean, isn't that what a veil is anyway? However, when I woke up, I had a perfect veil made from the fabric I had originally bought to make my veil and even had some scrap lace from my dress as the head piece. My mom had stayed up till 1:00am to finish it, and it was perfect.

I definitely went through a panic about a month before the wedding when I thought I had made a terrible mistake in not making a white dress. I thought that this was my one time to wear a beautiful white dress and I ruined it by choosing blush instead. I also went dress shopping to secure my decision to wear my homemade dress and found some very nice options, but the entire time I was trying on dresses my eyes were drawn to a whimsical blush dress on a mannequin that was so much out of my budget that I wouldn't even dare to ask to try it on. So blush it was and I don't regret my dress at all. I loved everything about it!

I wish I could tell you more about how I actually made my dress, but I honestly don't know myself. I didn't use a pattern or dress form, I just eyeballed it and kept adjusting until I got it just how I wanted. If you look very closely, you can definitely tell that it wasn't made by a professional. It has mistakes and the inside seams are far from exemplary, but I figured no one would be looking that close anyway! It's probably a miracle it turned out as well as it did.  In the end, it didn't matter to me. I loved my dress and I'm glad I got to wear something that I made, imperfections and all. 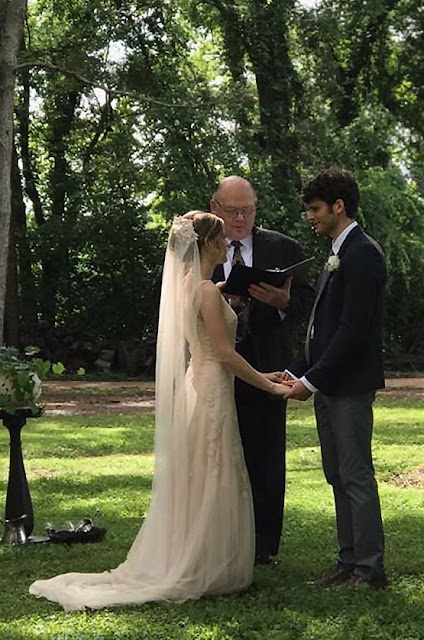 Here are some videos if you want to see it in action!
Blimey Cow
Inclement Films

Email ThisBlogThis!Share to TwitterShare to FacebookShare to Pinterest
Labels: Life

Wooo wooo!! This is incredible! You go!
Perfect timing, by the way! I'm at the stage where we know we're getting married and having a short engagement. And....I also just decided to make the dress based on modifying a designer dress that's waaaayyyyy out of my budget and that I'd change anyway. :-P But I've got a wonderful older lady from church beside me who makes sewing an absolute art. Super glad she's here because I'm pretty novice at sewing too. Bonus! ;-)
Thanks for writing this great post, girl. You have no idea how much of a serious confidence booster this is!

I thought your dress was super pretty, I never would have guessed you made it! The fact you made it yourself just makes it that much more special(:

You are so brave to even attempt something like this! The dress turned out so beautifully. Great job!!!

Making your dress just seems to speak volumes how you prepared for marriage (not just the wedding), really putting effort in and putting yourself into it. Way to be creative too! I am sure it means a lot to Jordan as well. Thank you for sharing your wedding dress story.

that is so amazing that you made your own dress! It looked beautiful. It was so kind that your mom stayed up for so long making the veil! Altogether, it looked stunning! I definitely am glad you chose a blush colour - it worked so well!

Wow!!! That is so awesome! I never would've guessed it wasn't a completely store bought dress. It looks so stunning! Great job!

The videos of your wedding are just so personal, genuine and sweet! It's really awesome to see young people doing life right! Saving precious gifts how God intended and seeing the "happily ever after" beginnings! Please tell Josh thank you for capturing that in a very creative way. Your family is so talented!

Oh wow. You are so talented and amazing!!!! It looks beautiful. Great job.
+Victoria+
justicepirate.com

I love the blush; it is so unique. And that is amazing that you did all that yourself. It certainly looks professional from the photos.

Wow, you did a gorgeous job! How creative, to start with some already-created dresses.

Very impressive. I couldn't believe you had done it yourself. Awesome job!

Great job with the dress (Congrats on the wedding)! It looks absolutely amazing on you. The pictures are really nice. It reminded me of a wedding I just attended. A friend of mine got wed in a rocking event space Chicago has and I was there as a guest and the bride and groom looked gorgeous in their dresses. The whole ceremony was magical!

OK so totally wierd person here I was wondering about how much would you say the dress cost you?

I don't remember exactly how much it cost but I think it was under $100.

Wow!! That's beautiful!! Years before I knew about you, Sarah, I was obsessing over that exact same picture you used as reference, also longing to tweak some things!! Your dress turned out to be my perfect dream dress!

Thanks for sharing your information.The insights are really helpful and informative.
The dress itself is very comfortable and easy to wear. These are so pretty! This dress is absolutely gorgeous!

Whether you’re going big and bold or intimate and subtle, one thing’s for sure, you want your wedding day to be memorable and to go without a hitch. simonswhiteweddingcars.co.uk

You've totally inspired me to make my own wedding dress someday! I plan on using bridal separates.
1) a white leotard
2) a long soft tulle skirt
3) a beaded belt

As we all know that choosing sarees for a wedding can be very tiring and tedious job and women are bound to get confused with the different types and styles of bridal wear that are available on display. Indian wedding The beach wedding on a serene beach of Goa offers you to wed the love of your life in an utter romantic environ.

Brautkleid Berlin You made such an interesting piece to read, giving every subject enlightenment for us to gain knowledge. Thanks for sharing the such information with us to read this...