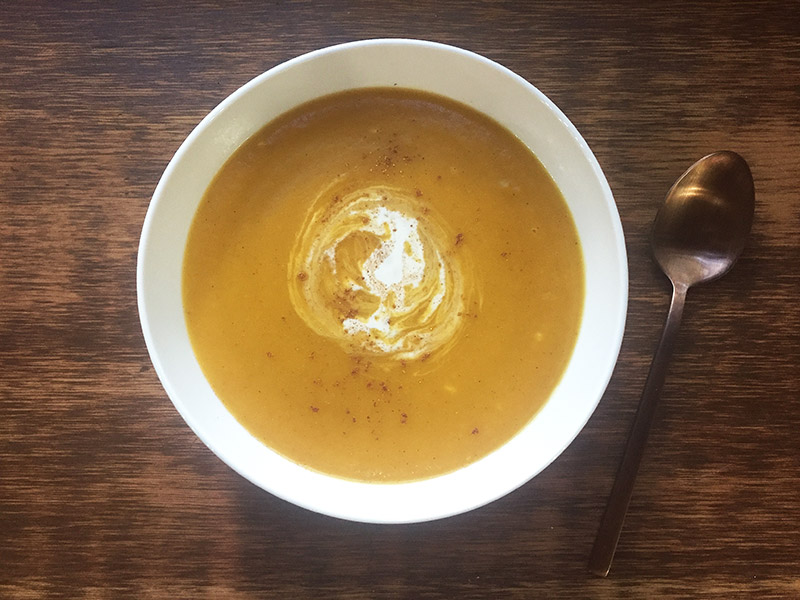 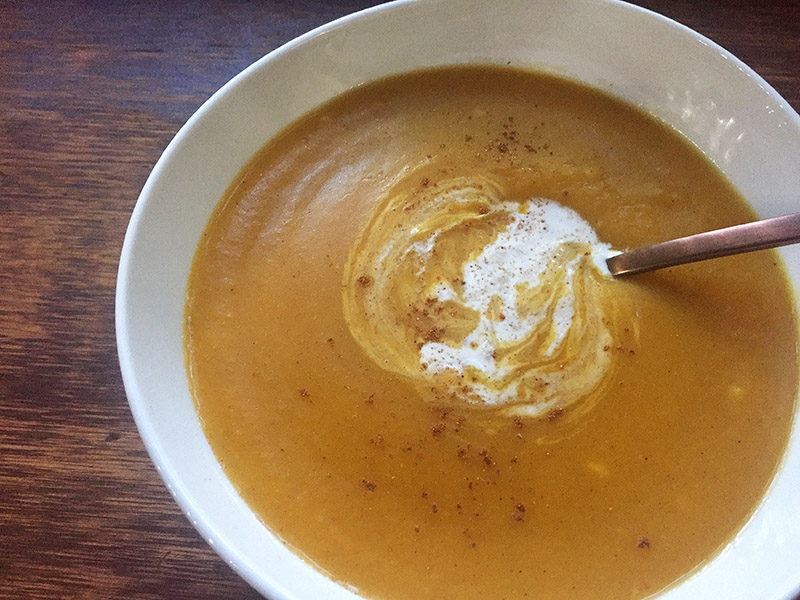 Even though it's currently 90 degrees outside, there's just something in the air that says the leaves will soon be falling, and that something also makes me have a craving for cinnamon and winter squash. So naturally I turned that craving into soup! I had never made butternut squash soup before but always thought it sounded delicious. I tried a canned version once that was terrible. I hate canned soup, I used to eat canned soups when I was little and thought it was really exciting! But after not having any for a while, I now realize that they are mostly terrible. But that's another topic for another day...

When I started to make this particular batch of butternut squash soup, I knew exactly what I wanted to put in it. But as I started gathering my ingredients and saw the cinnamon sitting next to a jar of minced garlic, I started to become a little skeptical of how it was going to turn out. To reassure my ingredient list, I looked up some butternut squash recipes to see what was normally actually in butternut squash soup. I found that there are a lot of different versions and some with similar seemingly strange flavor combinations, so I decided to proceed with my original plan!

This soup turned out better than I could have hoped for! It really is good. Don't be scared away by the cinnamon, garlic, and pears. Give it a try!

1. Start by roasting your butternut squash. I do this by cutting off the top and bottom and then cutting it in half lengthwise. After that, remove the seeds with a spoon. You may peel it before or after roasting. Place on a lightly oiled baking sheet and bake at 400 degrees for about 45 minutes or until tender. The cooking time will vary greatly depending on the size of your squash, so just keep an eye on it.

2. Once your squash is cooked and slightly cooled, add the squash, pear, and milk to a blender. You might have to blend it in batches depending on the size of your blender. Blend until smooth. If the mixture is too thick, add extra milk.

3. Pour your blended mixture into a large pot and mix in all other ingredients. Simmer until hot.

4. Serve as is or garnished with a splash of heaven cream and a sprinkle of cinnamon.

This recipe will vary slightly depending on the size of your squash, so feel free to adjust the amount of liquid and spices to your taste.

Yummy! I make butternut soup many times in winter. In South Africa, it is very common and eaten on a regular basis. I usually use apples instead of pears however although most people don't add either and it's still good! :) It is Spring here now so butternuts are not in season at the moment sadly!

I tried this today, and it’s SO tasty! I wasn’t brave enough to try it with goat milk, but maybe I will next time. Looking forward to more recipes to try in the future! :)

I am very curious about what you and Jordan normally eat. Do you menu plan? Use mostly other people's recipes or come up with lots of your own? Please share lots! From what I have seen in pics or videos, you come up with pretty healthy, very interesting and pretty meals.

really very nice and knowledgeable blog.This post is basically easy to look at and see without overlooking any genuine segments. I am hoping the same best work from you in the future as well.

I love success stories about families who have adopted dogs from shelters! It makes me super proud to be a supporter of #AdoptDontShop. For more success stories, check out the Furever Home Friends series, which will be coming out on Friday, August 11--in two days!
kizi
online game for kids
friv game 2019